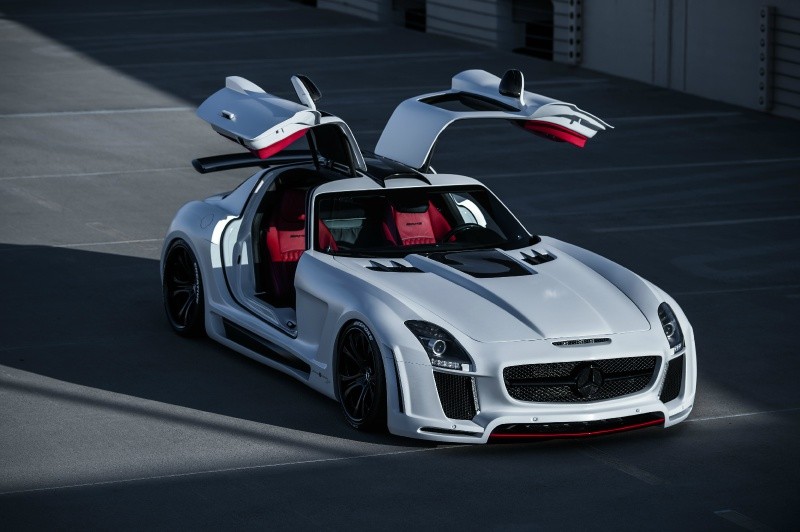 The Mercedes SLS AMG coupe and roadster came out in a limited series 10 years ago, but they are still sought after and never fail to impress with their impeccable design. And while the roadster had its own perks, it was the two-door coupe variant with its gull-wing doors that instantly became the crowd favorite. Perhaps that is why it warranted the attention of the British luxury car tuner Creative Bespoke.

With its new FAB Design all-carbon body kit on, the German vehicle takes on a completely new and exciting appearance. Included are a front apron complete with the integrated spoiler and enormous air intakes, larger side skirts and fenders, wider side panels, and a bulky rear apron that lends the rear part some visual weight and prominence. There are air scoops on the hood cover and the roof, and the entire body comes wrapped in a White Satin film wrap made by 3M.

Unpainted carbon components, the black radiator grille, and a set of 20-inch FAB Evolution three-piece carbon rims create the necessary contrast against the white body, while air suspension ensures that the wheels fit perfectly within their respective arches.

Creative Bespoke did not mess with the engine, but it did swap the factory muffler out for an FI Exhaust valve-based performance exhaust system.

The interior of this custom Mercedes SLS AMG still sports the same red-and-black gamma as the production car, but do not be misled into thinking it is stock. The company went through the pain of replacing the entire cabin upholstery with its own design, adding some fine details such as the handmade floor mats or the Rolls-Royce inspired “stary sky” ceiling.

Let us talk money now. A new Mercedes SLS AMG coupe would set you back around U.S. $200,000. A full FAB Design body kit would be over $95,000. Finally yet importantly, commissioning a custom job like this with Creative Bespoke would be around $40,000. This should give you a pretty good idea of what to expect if you want a car like the one on the photos.