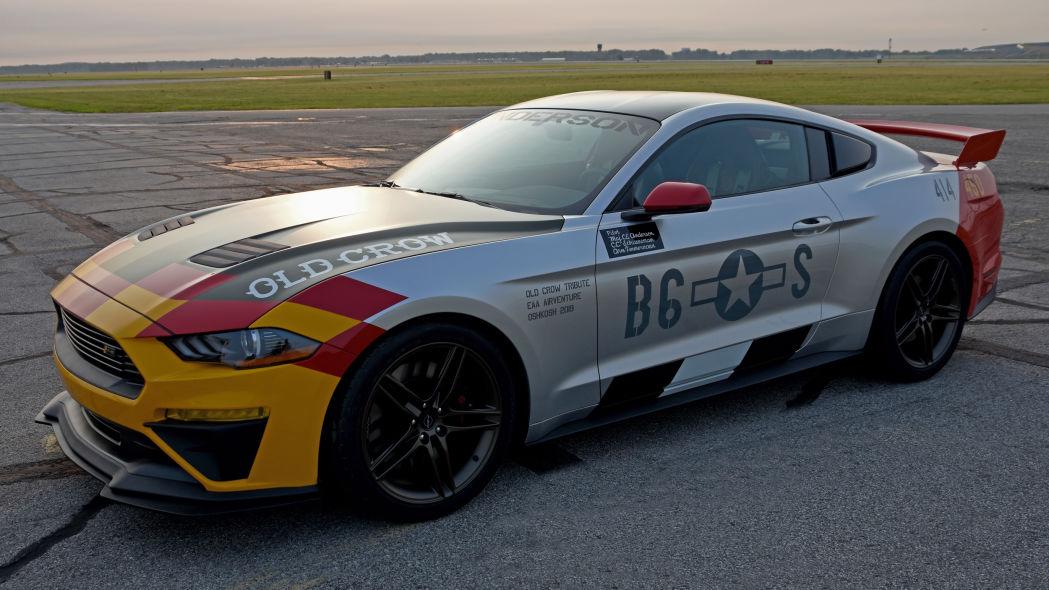 Have you noticed? It has been a while since we reported on any crazy-but-cool tuning projects. Time to fix this! Enter the Roush Ford Mustang GT Old Crow, a muscle car stylized to look like the P-51 Mustang fighter/bomber plane straight out of the 1940s.

Roush Performance is responsible for the awesome job, which it dedicates to famous U.S. test pilot Clarence Emil “Bud” Anderson. The pioneer of military aviation has spent over 7,500 hours airborne piloting more than 130 different planes, has made 116 combat flights during the WWII and won at least 16 air fights. It was during the war that he dubbed his fighter “Old Crow”.

Compared to the production-issue Mustang, the P-51 sports the full 2018 Roush Mustang kit and flaunts a humongous 2020 Shelby GT500-style rear wing that admittedly does make it look a bit like a fighter jet. Then, of course, there is also the unmistakable Old Crow livery contributing to the likeness.

Crack the door open, and you will be greeted by brown leather seats, four-point safety harnesses from Sparco, red door handles and gear selector, and the inscription “P-51 Mustang” on the dash.

Being a performance tuner at heart, Roush naturally couldn’t resist dialing the output of the vehicle up to 710 hp (529 kW).

The unique Mustang will go under the hammer in Oshkosh, Wisconsin, USA, on July 25. The money earned will be donated to charity.