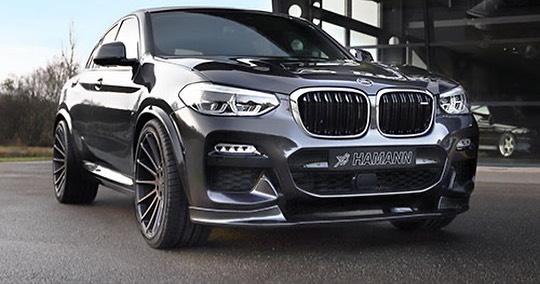 When German tuner Hamann Motorsport unveiled its new body kit and alloy wheels for the BMW X5 (G05) not long ago, it was too easy to overlook a similar package released for the BMW X4 (G02).

Included are a sporty-looking front spoiler, a rear diffuser, and modestly widened fenders. Those who want it may additionally opt for a tailgate lip or a small rear wing. Overall, the parts look cool, but we haven’t been able to find high-resolution photos to show you, so sorry about that. The video also shows an older Hamann kit, as the tuner hasn’t uploaded anything to YouTube just yet.

Anyway, what really makes the Hamann X4 shine is the company’s signature Anniversary Evo forged rim set measuring 22 inches in diameters. The low stance makes sure the wheels fill out their respective arches perfectly and lend the Bavarian SUV an extra bit of character.

Wrapping up the list are ornamental exhaust finishers and various minor cabin accessories.