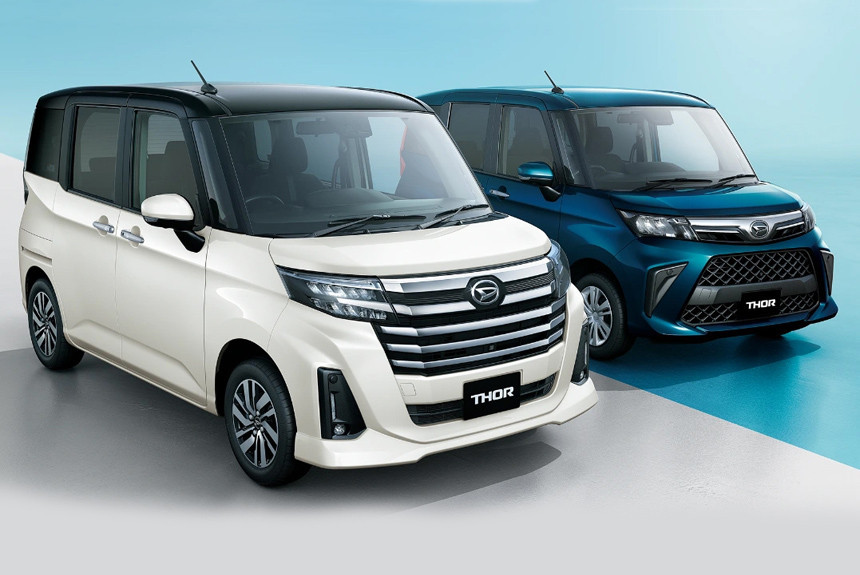 The original Daihatsu microvan debuted in the fall of 2016 and is now heading into 2021 with new styling and fewer versions.

But first, let us sort out which car is which. On the Daihatsu side, there is the Daihatsu Thor and the Daihatsu Thor Custom. Both are technically identical and only different in terms of exterior appearance and trim options. You can tell the Thor by its giant front bumper air intake and the Custom by its larger grille. Their Toyota-branded counterparts used to be called Tank and Roomy, respectively, but the Tank (see video) is no longer on the lineup. Instead, Toyota now offers the Roomy and a new Roomy Custom model.

On the inside, the steering wheel and seats are new, and the center console has been quite substantially redesigned. A new electronic parking brake button comes to replace the old brake pedal, and the optional nine-inch entertainment system benefits from UI improvements.

The tiny vans ship with two 1.0L, three-cylinder engines: a naturally aspirated one with 69 hp (50 kW) and its supercharged version rated at 98 hp (73 kW). CVT drives both, and only the non-turbo version can go AWD.

Sales in Japan have already started. Curiously enough, prices are not brand-dependant: the Thor and Roomy both start at the equivalent of U.S. $14,800, while both Customs begin from $18,200.

The microvan family also includes the Subaru Justy model, but this one hasn’t received any updates yet.