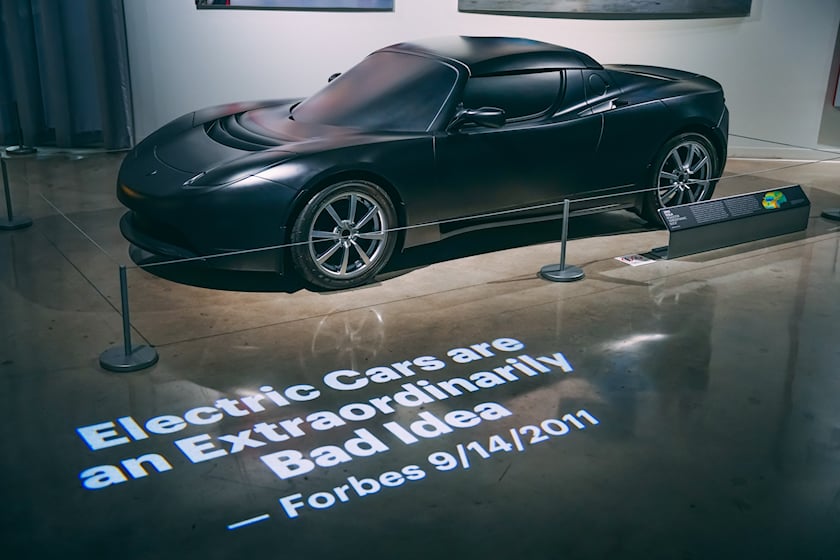 The Petersen Automotive Museum has opened a new exhibition titled ‘“Inside Tesla: Supercharging the Electric Revolution’. The floor is dedicated to all kinds of electric cars – not just from Tesla and not just the mass-produced ones, either.

Among other highlights, the visitors may check out a vintage 1908 Columbia Victoria Phaeton electric carriage, a battery-powered AC Propulsion tZero that inspired Elon Musk to launch his electric car business back in the 2000s, and the Lotus Elise that later provided the basis for the Tesla Roadster.

Another highlight is a ceiling-mounted projector located next to the roadster prototype, which projects various skeptical quotes of major media personalities and experts onto the floor of the exhibit. Despite being barely a decade old, it is already clear as day that these predictions had aged like fine milk.

Other noteworthy sights to be found in the museum include a disassembled Tesla Model S suspended from the ceiling, prototypes of the Roadster II, Cybertruck, Cyberquad and Semi, the millionth Model Y produced and the formidable Model S Plaid that set a new North Loop record.

Also on display are a robot known as Tesla Optimus and an exhibit dedicated to The Boring Company, Elon Musk’s other company currently specializing in building underground tunnels for self-driving electric vehicles. The innovative mode transportation is already being used in select U.S. cities and a few other countries.