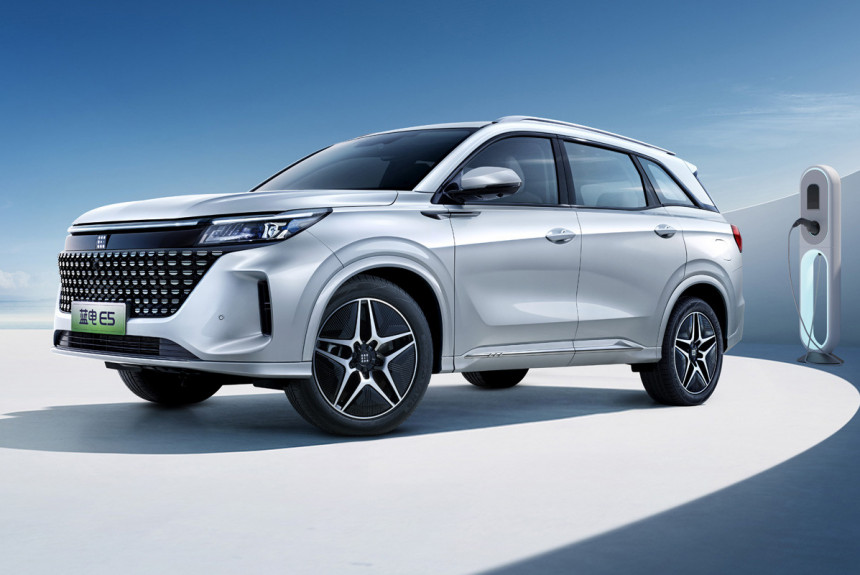 Dongfeng has introduced the Fengon E5, a new take on the Dongfeng Fengon 580 SUV that went into its second generation last fall (see video). The car is 4.76 meters long and runs on a highly efficient hybrid powertrain.

Rather than using a standard turbo engine, the Fengon E5 relies on a tandem between the engine, an electric motor and an automatic transmission. The engine can work in parallel with the motor for added thrust, but most of its time is spent producing power for the electric motor in serial hybrid (range extender) mode.

The hybrid system is called DE-i and was designed by Seres Group (formerly known as Sokon Group), a company partially owned by Dongfeng and known as a manufacturer of electrified and fully electric vehicles under its own branding. The 1.5-liter Fudi Power engine powering the Fengon E5 is naturally aspirated and burns gasoline for 110 PS (108 hp / 81 kW) along with 135 Nm (100 lb-ft) of torque.

The drive stays on the front axle at all times. The main electric motor produces 176 PS (174 hp / 129 kW) and 300 Nm (221 lb-ft) of torque. Most of the time, the motor drives the wheels while the engine generates more power. When particularly fast acceleration is required, however, the efficiency of the all-electric driving mode falls rapidly. This is when the gasoline engine kicks in through a special clutch mechanism and a single reduction gear. There is no gearbox. The system is not unique and is used in Mitsubishi hybrids, among others.

The traction battery is mounted under the floor and holds up to 17.5 kilowatt-hours of power. You can recharge it from a wall socket or at a charging station. Once at 100% full, it yields up to 87 kilometers (54 miles) of all-electric range, enabling the manufacturer to claim a record-low fuel consumption of 1.35 liters per 100 km (174 MPG for our North American readers). With the gas tank and the battery maxed out, the range reaches 1,150 km, or 715 miles. The top speed never exceeds 165 km/h (102 mph).